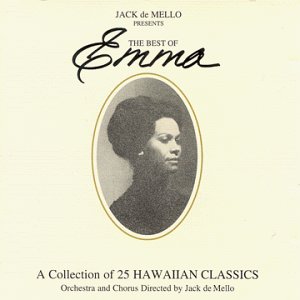 In this collection, The Best of the Hawaiian Classics, Emma, with great warmth and understanding of her Hawaiian musical heritage, fuses notes and words into an emotional translation of the true meaning of Aloha. And, with the same mastery of interpretation, she explores the many treasures within the music of our ethnic groups. People which were to eventually fuse with one another and become the amalgam known as Hawai'i's Golden People.

Emma was born into a family steeped in service to the monarchy. She was mischievous at times, but the old-time virtues of graciousness, hard work, formal education and the ability to speak perfect English were instilled in her at an early age.

Emma first sang publicly as a 5-year old in a school program. She was soon singing professionally, won numerous talent contests after that, and became a local radio star. She also performed in the live shows presented between movies at the Princess and Hawaii theatres, and at the E.K. Fernandez circus in A'ala Park.

Emma attended Kamehameha, studied piano at Punahou, and graduated from Roosevelt. She received a scholarship to study opera, but eventually decided she didn't want to be limited to singing only one style of music. Opera's loss was Hawai'i's gain.

Prior commitments forced Emma to decline an invitation from Andre Kostalanitz to join the Metropolitan Opera, but she sang with the Honolulu Symphony and the Atlanta Symphony, and toured internationally.

Emma has been heard worldwide on "Hawaii Calls" and seen on network television with Arthur Godfrey and Mike Douglas. Her acting credits include stock company productions of "Showboat", "West Side Story", "The King and I" and "Flower Drum Song". Work on "Hawaii Five-O" put her worldwide on television as well. Band members are... Jack de Mello orchestra amp; Emma Veary vocals